Maine Lighthouses You Can View 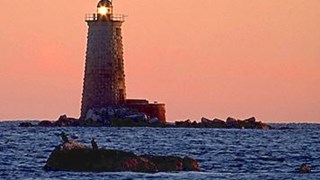 the light was positioned to protect the Portsmouth, NH harbor. The tower was constructed in 1872 of unpainted granite blocks topped with a fourth-order lens. Today the light shines a revolving DCB-224 airport-style beacon. The keeper’s quarters are integrated into the tower. The best vantage point for viewing Whaleback is from Fort Foster Park.

There’s not much to Boon Island. No soil, no vegetation–just the hellish storms and a strip of jagged rocks waiting to rip 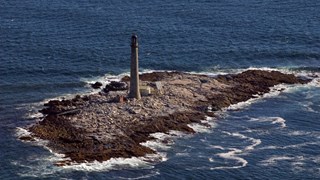 open a passing ship. It’s an impossibly inhospitable place that witnessed a cannibalism incident in 1710 when the Nottinham Galley ran aground, and the survivors had no way to get to shore. The first two lights built on Boon Island were swept away. In 1852 the tallest tower in New England was built– 137 feet of massive granite blocks. Of all the choice lighthouse keeper assignments in Maine, this was not one of them. And yet, keeper William W. Williams served on Boon Island for 27 years. The light was still manned until the Blizzard of 1978. There were 2 lightkeepers on the island and during the ferocious storm, the lightkeepers quarters, the supply building and the boat house were completely blown off the island. The keepers had to take shelter in the lantern room itself until they could be rescued via Coast Guard helicopter a day or two later. As the storm raged, granite blocks in the light cylinder were knocked out of the structure and thrown into the sea. After the blizzard, the light was repaired, and a large solar panel supplies power to the light today.

The island is 700 feet by 300 feet, 15 feet above water and only has the light itself, the solar panel, a generator / power building and the few remains of the lightkeepers quarters. Boon is 9 miles offshore from York Beach, where this photo was taken. The light can be seen from Cape Neddick.

Built in 1879, Cape Neddick is the southernmost of Maine’s many lighthouses. It is also called Nubble Light, referin 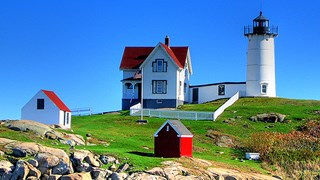 g to the barran rocky island (the Nubble) on which it sits, just off shore. The 41 foot tower is constructed of cast iron plates lined with brick. Cape Neddick’s fourth-order lens flashes red every six seconds, and is visible for 13 miles.

Cape Neddick is an extremely windy point, and viciously cold 100 mph winds caused problems with the flow of oil to the lamp for many years, until electricity came to the Nubble in 1938.

It’s easy to view or photograph the light from a vantage point at the end of Nubble Rd. out of York. There is a park with a clear view of the Nubble just offshore. It’s tempting to cross over to the island at low tide, but signs clearly warn of the consequences. While you’re there, plan to stop in at the Lighthouse Restaurant, where you can get a table with a clear view of the flashing red light only a hundred yards away.

From Cape Neddick you can also catch a glimpse of Boon Island Light, nine miles offshore. In fact, if you look closely at the photo below, Boon Island’s light is visible at the right side of Nubble, just below the clouds.

A fine art print of this lighthouse is available for purchase.

Goat Island Light was first established in 1822, then rebuilt in 1859. The 25 foot brick tower originally had a fifth-order lens, but has been automated with a 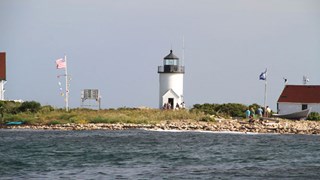 300mm optic. It’s still and active aid to navigation, but the Coast Guard leases the island to the Kennebunkport Conservation Trust. You can view the light from the lobster company docks at the entrance to Cape Porpoise Harbor, just up the road from Kennebunkport. While you’re there, get yourself a great lobster roll and sit out on the dock.

This area of Cape Elizabeth is known as Two Lights. As early as 1828 two stone towers were in operation, roughly 300 yards apart. In 1874 the two stone 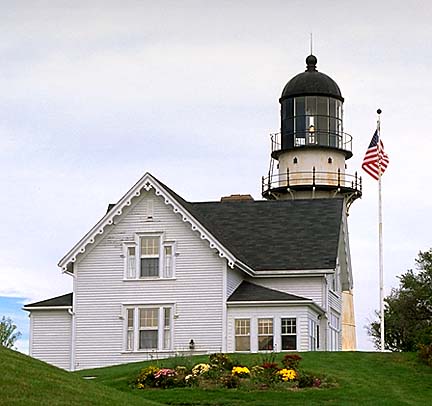 towers were replaced with 65 foot cast iron towers, painted brown and fitted with second-order fresnel lenses. In 1924 the government decided to convert all twin-light stations two single towers, so Two Lights western tower was decommissioned. Today Cape Elizabeth’s tower shines the most powerful light in Maine–a 4 million candlepower flashing white light visible for 27 miles. Located in Two Lights State Park, the keeper’s house is now a private residence in an excusive neighborhood. The remains of the western tower are down the street in someone else’s front yard.

Update 1999: The gingerbread keeper’s house at the active light has been demolished by the owner, to be replaced by a “replica” with a two-car garage added. The lighthouse, which is not privately owned, remains untouched.